Every time I take a look at the newspaper there are always discussions about the so-called 揼lobalisation? Globalisation of markets, of banking, of production and, with a band like EXPLOSICUM, of Metal. A Chinese band sounding like an American Thrash Metal band. All the representative elements are at hand ?fast riffing, mid-tempo mosh-parts, high-speed drumming, many guitar solo-attacks, an aggressive vocalist ?it is all there. The only weak point of this debut are the vocals. The singer tries to perform high-pitched and aggressive and sadly fails on both aspects. It is not aggressive at all, and the high-pitched is not clean enough, as he tries to sound aggressive. Musically there is nothing to criticize, good Thrash Metal. But the vocalist ruins the whole output. Maybe I am a little bit to intolerant, but reviews are always subjective and due to the vocals this album is close to the edge of being unlistenable for me. Of course other people may have a different view, so just visit the band's myspace site to make your own opinion. One last comment referring to the band name. What the hell does EXPLOSICUM mean or stand for? For me it sound pretty senseless. Well, not every band name has to have a deeper meaning or so, but EXPLOSICUM sounds like the Metalheads from China invented a new word with no meaning at all. Reminds me of people getting Chinese symbols as tattoos and thinking they can be translated with words like 損ower?or 搃nner strength?but actually stand for 揷hop suey? www.myspace.com/explosicum 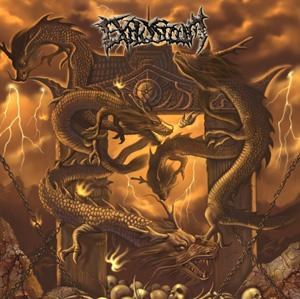